Sorry for the delay in updating my adventure 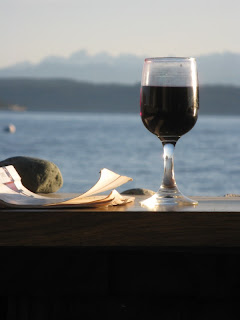 I have been collecting my thoughts and notes
while re-cooperating at my mother-in-law's beach-side cabin at Elger Bay, Camano Island,
Washington. 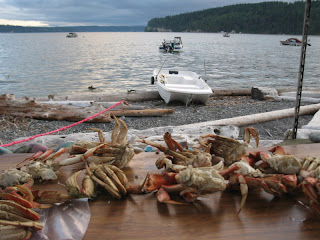 Also regaining my strength by eating fresh caught Dungeness Crab.  (My brother-in-law's boat and dingy in the mid-ground!)
Lots to think about concerning my recent bike adventure; foremost being...,
compared to this,
"What was I thinking!"
Also, what a whimp I was.  I have found some of the blogs of the various cyclists I met along the way and THEY are still AT IT!!  "Allez Les Ga!!"
You can check on them in the Blog List on the right.
Posted by Ron Bloomquist at 12:19 PM 4 comments: 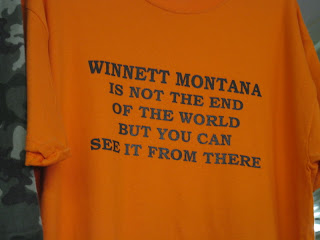 Little did I know, when in Winnett, I could almost see the end of my 70th Adventure too.
I had been doing so well, I had even set my personal best mileage for one day's ride between Winnett and Jordan, 77 miles!!  But the next day the wind shifted, unseasonably, to the east and in four hours I could only accomplish 13 miles!! 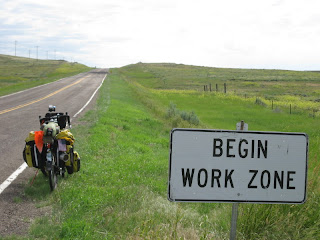 This sign tells the story!
Northeastern Montana just doesn't quit!  Endless, roller coaster hills, head wind and no shade.  In fact I had not had shade for days; there is no shade.  Temperatures in the 90's each afternoon. 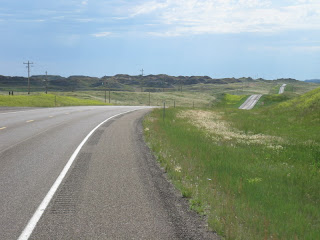 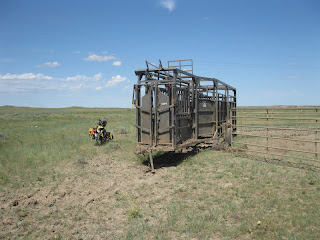 I finally found some shade under this portable de-horning, branding, castrating machine and waited three hours for the winds to abate or turn.  It didn't.  At 4:00 PM I let myself be blown back to Jordan and checked into the motel.  On the weather channel I discovered the weather would be the same for the rest of the week, "20 mph winds from the East and Thunderstorms".
The fun was over.  I finally had to admit I had had enough.  I hitch-hiked with the bike 66 miles to Circle and another 66 north to Wolf Point, Montana planning to catch the Amtrak back to Seattle only to discover when I got there that Amtrak is not operating due to flooding in Minot, North Dakota!!  And..., I discovered there's no Grayhound operating out of Wolf Point either.  Nothing left to do but call my "extraction team"!! The deal had always been; my brother would buy the bike and my sister would get me home.  All I had to do was pedal!! 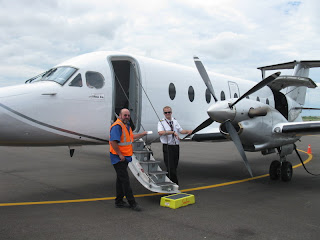 I made the call!
The next day I was winging my way back to Seattle!! 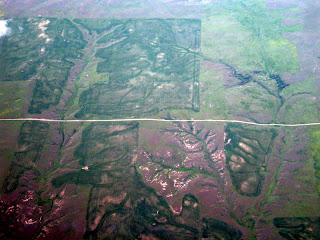 Looking out the window at the road I left behind I don't feel I am missing a thing!
Two months and 1,839 miles via bicycle.  Good enough for this old man.
I met some wonderful people and visited some great small towns.  The rest of it was a hell of a lot of work.
I'm going to kick back, collect my thoughts and photos and put them into a book, eventually.
Ronnie's 70th Adventure has finally come to an end.
Sorry if anyone is disappointed.  I'm not!!  :-)
Posted by Ron Bloomquist at 5:49 PM 8 comments:

Contributors to the delinquency of a Senior!!