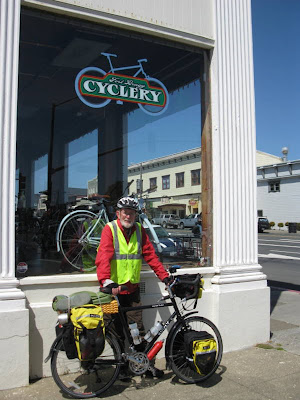 I'm hitting the road for Canada tomorrow morning, May First!!  Finally!!
I have put 1,235 miles on my Long Haul Trucker since December 24th, 2010.  The guys at Fort Bragg Cyclery did a tune-up on it this week and it is ready to roll.  The panniers are packed.  I have two days worth of food on board to get me to Standish Hicky and an opportunity to resupply.  All up weight, including me in the saddle?  250 pounds.
I will try to update this blog via libraries and wi-fi cafes, now and then,
and Facebook with my Android.  I won't know what really works until I'm out there doing it and...,
I be doing it starting tomorrow!!!!
Posted by Ron Bloomquist at 6:34 PM 10 comments: 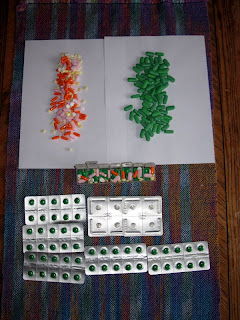 I asked my doc how many of my pill prescriptions would I have to keep taking during my bike ride.
His answer, "All of them!".
So, I spent the evening piling up six weeks worth!
The top left mix of pills fits into one pill bottle.  The top right, Calcuim + D (two per day) fits into a second pill bottle.  Just below is a one week pill box into which I will sort pills week by week.
Below that are two types of pills that need to be in blister packs because of moisture. 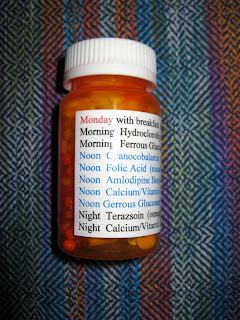 I made a special label to help me remember what and when. 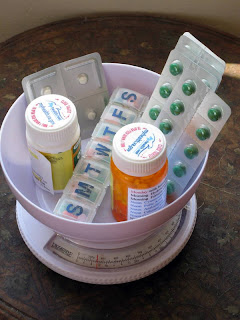 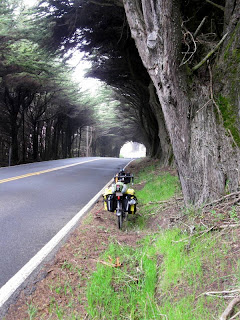 Thirty percent chance of rain Saturday, eighty percent Sunday.  Should I go or should I skip it.  After sufficient mental gymnastics I decided to go!  Besides, how can I test my new tent if it isn't raining?
I decided to ride twenty miles north on HWY 1 to the Union Landing campground.
I have always loved this tunnel of Cypress north of Fort Bragg.  Driving in a car there is no place to pull over to take a photograph but riding a bike, no problem! 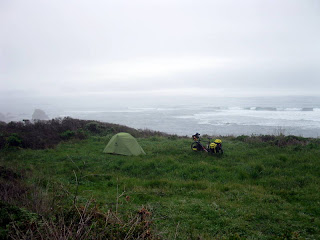 Upon reaching the campground it is a gray and dismal day. 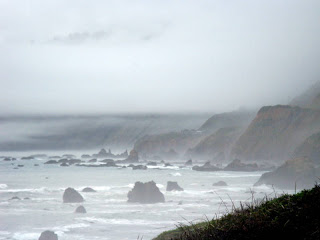 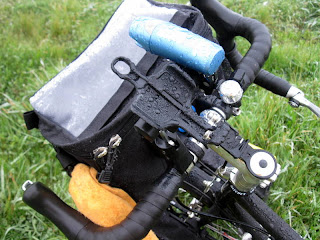 Light, relentless, wetting, drizzle but the hiker/biker tent sites are only three dollars! 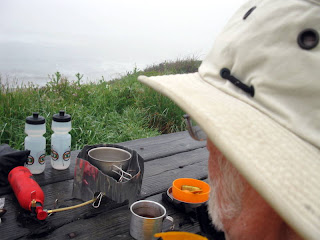 Gazing out over the fog cloaked sea while my tea water heats. 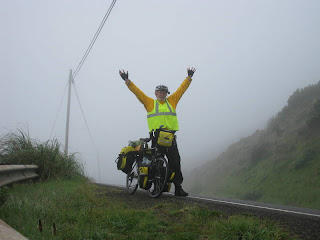 Sunday return.
The Hubba tent worked great and kept me and my stuff dry.  The silicon coating I gave the panniers helped a lot.  The Whisperlite stove did fine.  I read my Kindle but have decided I will not take it on my "Adventure".  I will take one novel and trade it for another at book stores along the way, or give it away when I finish it and buy another one.  That way I will also get to meet book store owners!  Also no worries about breaking the Kindle. 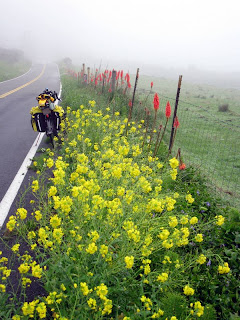 The temperature is perfect for riding.  A steady 55 degrees, no wind.  The drizzle has everything bursting with spring. 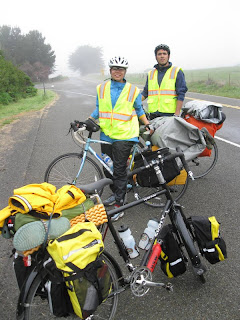 During this weekend I met three sets of bike touring folks.

Saturday afternoon a guy riding from Canada to San Diego.  He is riding a 54 inch Long Haul Trucker just like mine only his is blue.  He also has a Hubba tent and a MSR stove.  He said he has been using regular pump gas from gas stations and the stove works just fine.


Sunday, the couple in this photo.  They are carrying seventy pounds of gear, each!!!  (But they're young!)  They left San Francisco and are heading for Maine!!!  Currently they heading for Portland and then east!

And finally, a single German girl.  She is riding from San Francisco to Canada.

Bike touring season is under way!  It is comforting to know that I am not the only one heading north!!  (Recommended bike touring of the Pacific Coast is to ride north to south because of the prevailing wind.)

This weekend ride went better than I expected and my hamstring kept its thoughts to itself!  :o)

Posted by Ron Bloomquist at 9:25 AM 4 comments: 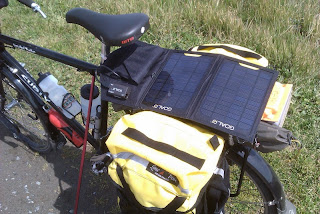 I gave the GoalZero a try during a fifteen mile ride yesterday.  It charged four eneloop AA batteries.  Nice to know it is possible but I think I will do most of the charging during lunch breaks and keep GoalZero packed away.  It folds to one third the size in the photo. 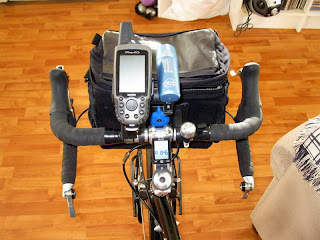 Another addition to the "Command Center".  My Garmin GPS handlebar mount arrived.  This too will not be used all the time but I believe it will come in handy when looking for stores, libraries or campgrounds.


Of course, cell phones can be charged while visiting a store, library or campground.  Double A batteries can be purchased almost anywhere. Directions to stores, libraries and campgrounds can be found by just asking.

But that's not the way guys do it when high tech is around!!
Posted by Ron Bloomquist at 10:35 AM 1 comment: 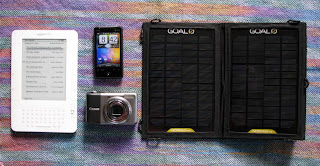 For my bike trip I'm taking my Kindle.  I will have a lot of books with me in a device that weighs 11 ounces.  Note: A 500 page paperback novel weighs 8 ounces!

Android cell phone weighs 4 ounces.  I plan to post Facebook updates from it as my trip progresses.  It also takes photos and will even do a phone call!!

Alas, I can't do without a "real" camera that has a tripod mounting hole.  My camera weighs 8 ounces.

All this consumes power and I'm sure there are outlets along the way but...., check it out!!!

My brother gave me something pretty cool for my birthday.  It is a GOALzero solar panel that will keep my Kindle, Android and camera powered.  1 pound 4 ounces.

Will 2 pounds and 13 ounces of technology be worth its weight?  I guess I will find out!!

Lolli thinks I'm nuts.  She calls it, "Lasers in the Jungle."
Posted by Ron Bloomquist at 10:33 AM No comments:

My seven mile walk Sunday morning went really well, I was more concerned about my ability to swim 70 laps.
1. could I do it and 2. would the pool be crowded Sunday afternoon.

I was at the pool when it opened, right at noon.  Turned out there were only two other men who were in the pool doing water therapy walking through the water and light swimming.  They were only around for about half an hour.  The rest of the time I had the lap pool to myself.  There were parties and music over at the "entertainment" end of the pool with kids splashing and playing and riding the slide but at my end it was just me.

Swimming laps can be very boring or very zen.  Just me with my head in the water doing the same thing over and over and over; eight strokes, turn, eight strokes, turn, eight strokes turn.  By the time I got to the third lap I was thinking, oh boy, sixty-seven more to go!   But then I got to thinking about where I was when I was three years old; I was in Freemont, Nebraska.  By lap five I started kindergarten.  Lap eight was when we moved to North Bend, Nebraska.  Ten and eleven and Boy Scouts.  Sixteen we moved to Washington State.  Nineteen, art school.  Lap twenty-two Gulf of Tonkin.  Coming up, fourteen laps of marriage!  Ross, Jeff and Sarah.  Lap forty-one, free white and forty-one!  Two and a half laps in L. A.  Twenty-two in Elk,  Lolli, Fort Bragg and so on.  It really helped pass the time and before I knew it I was at lap seventy and seventy years old!  Cool!  That was fun!!

I had ridden my bike to the pool so after my swim I just rode around town until the odometer read 1,007.  Easy peasy.

Ed McKinley showed up at six to learn how to operate granny.  Then Lolli and I walked to V Canto's for dinner arriving at seven o'clock! 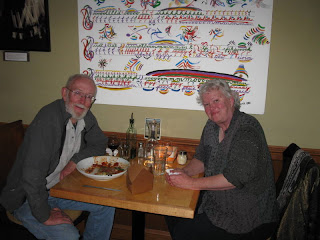 We ordered our dinners which were seven teen dollars each and we each had a glass of wine which cost, seven dollar per glass. 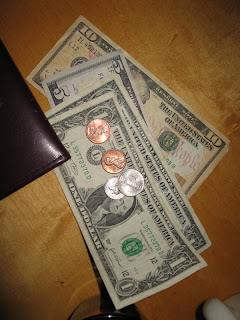 We walked home and Lolli took over granny duty while Ed and I walked to the Tip Top Lounge where I had a "Seven and Seven".  Not my idea of a great drink but it seemed like the thing to do in keeping with my "theme". 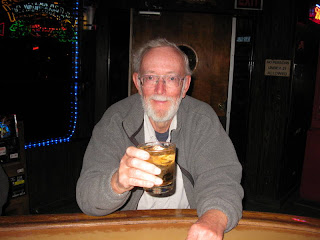 Here's to all you well wishers!
All in all a Perfect Seventieth Birthday!  The most fun I have ever had on my birthday and I can't imagine topping it!!

Now to start concentrating on Ronnie's Seventieth Adventure!
Posted by Ron Bloomquist at 11:40 AM 3 comments:

A Birthday of Sevens!! 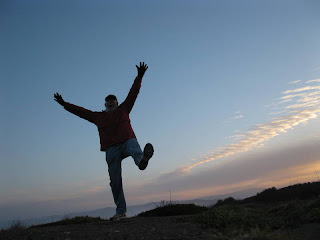 Up at 5:40 for a seven mile walk out the Ten Mile Haul Road and back. 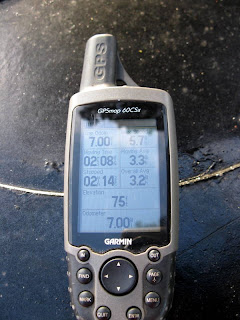 Then off to the Fort Bragg Fog Busters radio controlled model airplane flying field where I hand launched and caught my flying wing seven consecutive times! 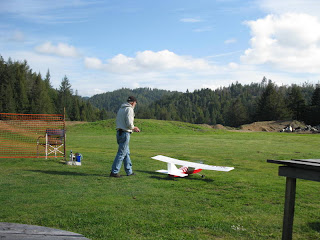 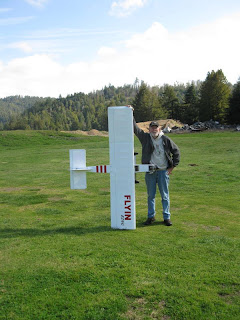 I love this plane with its seven foot wing span. 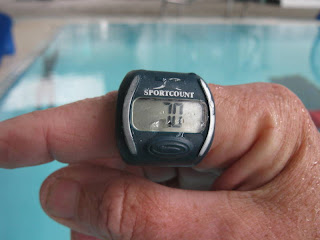 Next, the V Starr swimming pool where I swam seventy laps in one and a half hours!  (Actually 140 laps the way they count laps at this pool!) 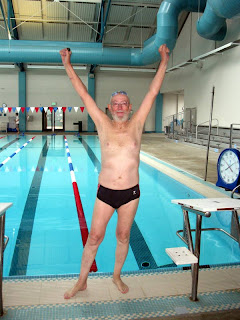 I wasn't sure I could do that having never swam more than forty before but hey!  I did it! 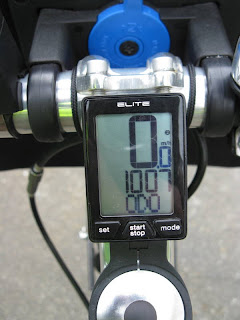 To round everything out I added seven miles to my bike's total mileage.

I got to blow out seven candles at both dinner parties with friends Friday and Saturday night.
Tonight Lolli is taking me to V Canto's for dinner at...., Seven!

And to wrap it up I may stop by the Tip Top with my friend Ed to have a
Seven and Seven..., just because!

Thanks to all my Facebook friends for your best wishes and to Ed McKinley for "babysitting" Lolli's elderly mom so Lolli and I could go out to dinner tonight!
This has been a fun and amazing Seventieth Birthday.
Posted by Ron Bloomquist at 4:44 PM 5 comments:

Hooray Hooray
The First of May
Northbound Pedalling
will start that Day!
That's my plan!
Things are coming together. My knee pain has subsided.


The VA pharmacy will send me enough pills to cover my trip.  Prostate pills, blood pressure pills, anemia pills, osteoporosis pills, the basic medications one acquires as one gets older.  Anyway, that concern has been taken care of.


I ordered a second pair of biking shorts.  I figure I'll wear one while the other is drying.
I have a tupperware bin I am tossing everything in that I want to take on the trip, those items that come to mind during these few remaining weeks.  Then, when it is almost time to leave I will see how much I can pare back!!


Today, during my training ride, I met a couple of  guys bike/camping their way from Canada to Mexico.  Lolli and I invited them to stay the night in Lolli's studio and have dinner with us.  I'm looking forward to hearing their suggestions for food along the way.  For some reason I am quite concerned about camping food.  I had no trouble figuring out my food for seven day backpacking trips but this shopping and camping on the fly is new to me.


My birthday is Sunday and I plan to celebrate the Sevens.  I want to walk seven miles in the morning, swim 70 laps in the afternoon and have 1,007 miles on the bike.  If there is anything left of me by evening Lolli will take me out to dinner at...., 7:00!!


Lolli and her mom return to Seattle April 12 and I will return to my full training program, what ever that is!


I have decided to look at this upcoming trip as camping trip on a bicycle.  Take it easy and explore along the route.  The Canadian border being my eventual goal or, maybe turn east at Astoria, Oregon.  I'm still thinking about it.  Old Highway 30 sounds mighty interesting according to the various journals I have read via CGOB.

Contributors to the delinquency of a Senior!!